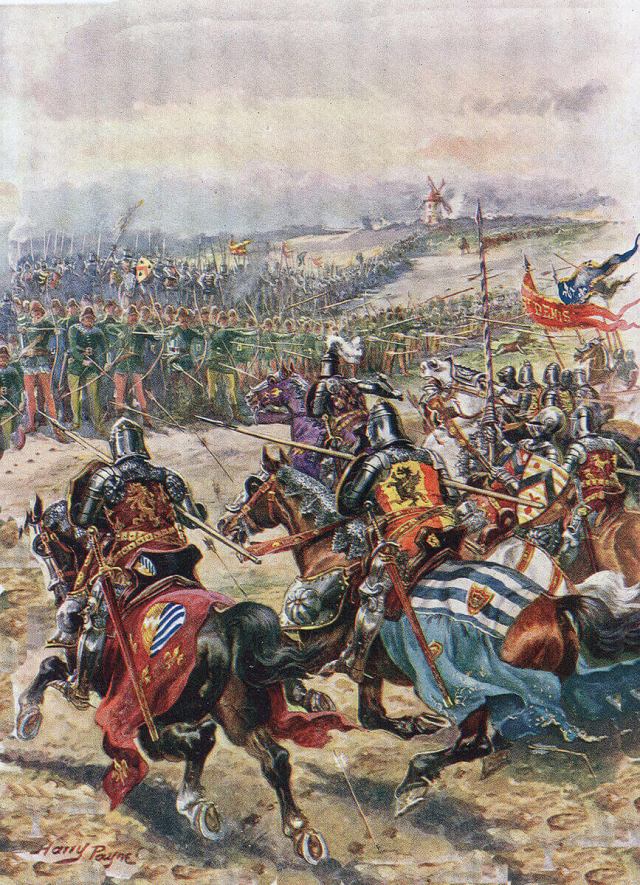 Last night saw our first medieval game and our first game using 12mm figures.  These figures are all from Kallistra in the UK.  Not only have they a great range but their mail order service is second to none.  We chose figures from their 100 Years War range because they can be used for a wide variety of armies across a number of conflicts and I did not use any national symbols or emblems so that they can represent French, English, Breton, Burgundian, Flemish, Gascon etc.

In addition the game is played on Kallistra’s own hex terrain which has a number of advantages (no measuring being the main one) but take a bit of getting used to.  I have to say that painting 12mm figures is a whole new experience for me and I painted 984 figures in only 6 weeks.  That would take me a year in 15mm.

The rules – Hordes and Heroes Medieval – are free to download from the Kallistra website together with a comprehensive set of army lists and other rules support backed up by an active forum.  They also have a free set of siege rules and sell castles and other fortifications to scale.  That is for another day however as we focused on learning the basic tabletop battle rules first.

The first thing I have to say is that the rules appear to be very simple on first reading but in fact they are far more subtle than they seem. Kallistra say they are working on a second version and I hope they will produce some rule numbering, cross referencing and more examples of play.  Indeed the examples could be separate at the end of the rules so that the size of the rulebook could be reduced for playing.  These are all minor criticisms however.  The basic mechanisms are easy and fast flowing and we finished our first game in an evening.  Familiarity with the rules will speed up future games.  We did encounter a few issues which we felt were not clear and we devised a few house amendments to deal with these.  However, as our understanding of the rules improved with play, we found that the need for such amendments diminished and I suspect that they will disappear altogether after a few more games.

The first test game consisted of a flat open plain so as not to complicate matters and the army lists produced a French army of mounted knights with some units of crossbowmen versus an English army comprised mainly of knights on foot and the legendary longbow men complete with their protective stakes. With thoughts of Crécy, Poitiers and Agincourt in mind the English formed up in a defensive line while the French mounted knights left their crossbowmen trailing behind while they charged forward to glory.

The outcome however was not as feared.  The longbow men proved to be not quite as lethal as their historical counterparts and although their stakes did provide some advantage it was not enough to stop the knights.  Obviously the secret is to combine the fire of a number of longbow units each time which is not always easy.  We liked the two part melee process but we did find it a little confusing in places however the dice decided most cases. The use of Generals was more advantageous to the defence and their participation in melee proved very decisive every time.

We learned a lot from our test game and will apply those lessons to our second game which is scheduled for next week.  I will however have to add more infantry other than knights regardless of their historical accuracy as the proportions in my current forces are too strong.

Below are a few photographs to give an idea of the test game. 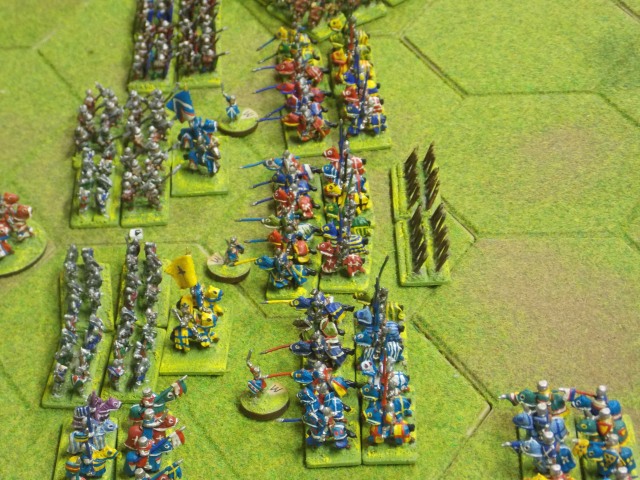 French knights break through the first line of defence 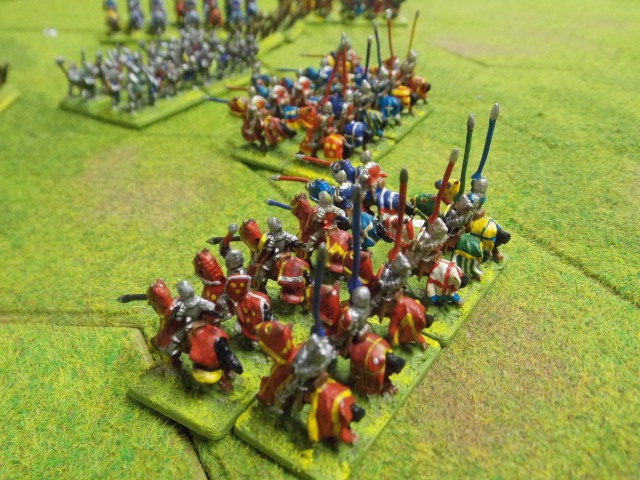 This entry was posted in 1346 Medieval, Uncategorized. Bookmark the permalink.